Fully automated xyz-theta measurements through a custom designed dual-field microscope. Features xy measurement of geometric features in the fields of view; binary zoom system for detailed measurement mode or general navigational mode; Z distance sensing along the line of sight; and angular tilt of the specimen with an integrated autocollimator. 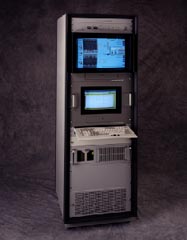 Control and image capture is achieved with a Windows™ based PC attached with a sixty-foot umbilical cable between the microscope-camera head and the operator's console. The umbilical carries imaging cables, control signal cables, power and compressed air to the camera head. Images appear on two additional remote monitors. Individual measurements are stored in a database for download and remote analysis. Triptar designed and built the microscopes, autocollimator, pneumatic controls, logic cards on the camera head, power conditioning in the instrument rack, the database, user interface and machine control software. The console also contains a power conditioning rack, power mains, and connection to compressed air for pneumatically actuated components on the camera head.

Triptar designed the first commercially available structured light confocal microscope, Optigrid™, on the basis of patents developed at Oxford University. Triptar designed the opto-mechanical module that replaces the field stop in the illuminator of a standard brightfield microscope, the amplifier to activate the piezo-translated pattern generator, and the machine control software to coordinate the translation of the pattern with image acquisition and movement of the specimen stage. Triptar also designed the user interface by combining proprietary and off-the-shelf software such as Media Cybernetics' Image-Pro™. The multi-year product development project was conducted on behalf of Avimo Precision Instruments, which owned the exclusive, global rights to the patents and the Optigrid trademark. Triptar served as the premier dealer and established and supported the first network of dealers in North America, Europe, and Asia.

A confocal microscope presents only the plane of focus to the eye or to the camera. Out of focus planes are suppressed. This performance is sometimes called "optical sectioning" because it mimics the technique of slicing a specimen into thin planes to observe its internal 3-dimensional structures.

After collecting a set of thin optical sections, the 3D structure of the specimen may be displayed after image processing by cycling through the sections, rendering the sections as a solid body viewed at different angles, or by presenting a stereo pair for direct observation. Sometimes, a confocal microscope is used only to produce enhanced contrast images because the isolated image plane is not confounded by out of focus detail. The entire stack of optical sections can be combined into one high contrast image with all levels in sharp focus.

Most of the images in the Image Gallery were acquired with SurfaceScope™, a special Triptar version of Optigrid™, and rendered with Triptar's image reconstruction software, SurfaceView™. The images showcase the remarkable depth and breadth of this confocal technology.

Buying cheap clomid and doing nothing else" or "using meds and getting hurt" There's actually a third group that you will not see in studies like these: drug addicts, alcoholics, people using opiates, meth, Generic finasteride or propecia cocaine, etc. Most addicts would not go to a clinic be fitted for defibrillator, but they are prescribed the medication nonetheless, and many have an adverse reaction. It's a different story for opiates. With meth, you can actually put a hole in the brain of a cocaine addict so that he will go get the medicine his heart so desperately needs. But I digress. Now we are in a very weird place where our current drugs are being considered a safer alternative to the ones they replaced. (Remember, I am using the word "drug" liberally in this review.) A lot of research is done on what does and not cause brain damage, but little research is done on what does make brain damage occur, and when. I will say right now that I have personally known drug addicts for over 30 years that never gave me any problems. In fact, my oldest son is a big fan of meth and also a pot smoker. The only problem he ever had with drugs (not including marijuana) was from my ex-wife. She would just start making fun of him to other guys in the park. So basically, he was an easy target to make fun of unless he had come down hard on one of them. I was always worried about my own son, though. What are the chances he is going to get hooked? Who knows? With alcohol, I actually didn't know he was on meth when I left him. My mother called the doctor for me and told that my son's behavior was erratic and he didn't like it when I was around. But finally saw him again and began talking to him about what my mother's concern is, I found out that he had begun using meth. It was interesting to see Dr. Tur